Looking for the best deal going in Williamsburg? Well here it is...... On top of an already great deal we are throwing in a 4th nights lodging for free, a 4th round of golf for free, lunch at each course for free and if that was not enough you get two free beers with each round!

This package is valid from April 4th through May 29th 2011 for $525 per person with all taxes and fees included. If you would like to discuss this package or get information on other options give Craig Gordon a call at 888.333.6079.

If you have kids, or are a kid at heart, Orlando means one thing: Walt Disney World. If you're a golfer at heart, Orlando means not only Disney World, but also a slew of outstanding public, semi-private and resort golf courses. It seems like half of the PGA Tour makes Orlando a home, likely due to its fine airport, wonderful climate, superior golf facilities — and hey, we've got to throw in Florida's lack of a personal income tax, too. Pros such as Tiger Woods, Mark O'Meara and Nick Faldo hang out mostly at such private enclaves as Isleworth and Lake Nona, but you never know when you'll run into one of these celebrities at a restaurant or grocery store. Best of all, Orlando has so many public-access Tour courses; you can feel like a star merely by putting your peg in the ground.

Give and take is the theme these days in O-Town. The real estate slump has shuttered the Ginn Open, won by Lorena Ochoa, but you can still play its distinctive venue, the Independence Course at Ginn Reunion Resort. This course is an entertaining Tom Watson design in 2002 that features the massive moguls, wildly undulating greens, and the vast sandy waste areas.

After the closure of the Pete Dye-designed Eagle Pines in 2007, Disney will have the new addition to its golf courses this fall with the debut of a new Rees Jones creation. Technically, the Waldorf Astoria Golf Club is not a Disney property, but it's surrounded on three sides by the Disney Resort. The course will serve guests of two new hotels, the Waldorf Astoria Orlando and the Hilton Orlando Bonnet Creek.

The closest thing Orlando has to royalty is Arnold Palmer's Bay Hill Club & Lodge, a civilized island in the city's sea of glitz and glamour that serves as winter home for the King. The Challenger/Champion nines make up the layout that has played host to the PGA Tour since 1979 and it's full of long, flat, no-nonsense, boldly bunkered holes that play over and around seven massive lakes. Drop-dead sceneries are not visible in the area. It would be just about the players and one challenging breeze-fueled holes. The relentless shot-making demands would make it easier for you to understand why Tiger Woods, a defending champion, has won several times in this course including the 2000-2003 four-peat.

An even older PGA Tour stop is at Walt Disney World which is home to the Palm Course and Magnolia Course that made their big-league debut in 1971. It was when Jack Nicklaus won the first of three straight. Of these two Joe-Lee designed spreads, two-time Ryder Cupper Chris DiMarco says, "The Mag used to be a great course — and it still is if you stay away from the back tees they put in back in 2005. The Palms is a lot of fun, with reachable par-5s." The Magnolia Golf Course tips out at 7,516 yards, but there's big fun to be had from any tee at the par-3 6th, which features a green protected at the right-front by a bunker shaped like Mickey Mouse's head. The Palm is the slightly tighter of the two, with many holes edged by jungle-like forest, with wildlife to match. Still, the premier Disney course is Tom Fazio's Osprey Ridge, which is distinguished by its mounds, its wetlands and its huge, very three-puttable greens.

Continuing the "magic" theme, I would put Grand Cypress Resort's New Course on your Orlando must-play list. Jack Nicklaus' homage to the Old Course at St. Andrews features no trees, minimal water (in the form of winding burns), semi-blind shots, double greens and more than 140 bunkers, some as much as 12 feet deep, where a ladder provides access. It's not everybody's cup of tea, but when the wind is up and the course is playing firm, it's like Scotland in sunshine.

Best of the Rest

Tiger Woods once uncovered that Ritz-Carlton, Orlando, Grande Lakes contained some of the best courses he had ever putted. The low-profile Greg Norman design eases past oaks, lakes and wetlands, but it's the service, facilities and conditioning that make it worth the hefty fee.

Ginn Reunion Resort's Independence course might be the best of the property's three choices, but the flower-laden Legacy course, crafted by Arnold Palmer, is close behind. The resort’s newest layout, a Jack Nicklaus product, typifies the essence of what Florida golf is all about even more when its new clubhouse opens next year.

ChampionsGate’s two tracks – The National Course and The International Course, both a flattish creation of the famed Greg Norman are also attracting plenty of guests year. The International Course that plays host to early December's Del Webb Father/Son Challenge, is probably one of the most coveted invitations the PGA and Champions Tour players get all year. The on-site Omni hotel is a plus, as is one of golf's greatest institutions of higher learning, the David Leadbetter Golf Academy, which has its headquarters here.

Orange County National's Crooked Cat and Panther Lake both serve as PGA Tour Q-School tests and comprise perhaps the best values in the Orlando area, though they're often overlooked, so superb are the practice facilities and Phil Ritson Golf School.

To keep up with the Joneses, you'll need to tackle Celebration Golf Club, one of the final collaborations between Robert Trent Jones Sr. and Jr. The course’s strategically deployed water hazards as well as the slopey greens will instantly give you an idea who designed the holes.


These are just a few of the great courses in the Orlando area. As you can see, there are nusmerous options for great golf with all sorts of pricing. Peak season green fees in Orlando can range from $70 to $150 plus. Looking for a Golf Vacation Specialist to help you plan your next golf getaway, you can call Glen at 888.333.6103 or email me at glen@golfzoo.com.

Bent Grass is no longer King in my book. 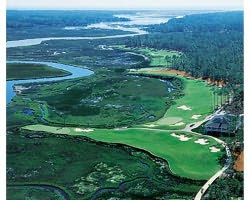 My entire golfing career (if you call it that) I have always said how much I love putting on Bent Grass greens and how much I despise Bermuda. The "older" Bermuda greens have always had thicker blades of grass and you could never count on the ball having a true roll. You always stood and watched your ball zig zag towards the hole hoping it zagged at the right time into the bottom of the cup. Here in Myrtle Beach more and more courses are changing over to the new and improved strands such as Mini Verde and Champion Ultra Dwarf and wow are they good! The blades are as thin as Bent giving a great roll but require far less maintenance. This past summer with 90 degree plus temperatures virtually everyday was the tipping point for golf course owners as the Bent could just not survive while the new bermuda greens were thriving.

If you would like to see for yourself just how good they are here are a couple of courses in the Myrtle Beach area to try: TPC Myrtle Beach, Arrowhead, Legends- Heathland or Rivers Edge. Call myself or one of other Myrtle Beach golf vacation specialists a call at 888.929.7300.

Get Your Online Trip Quote Now!

Some of Our Favorite Websites